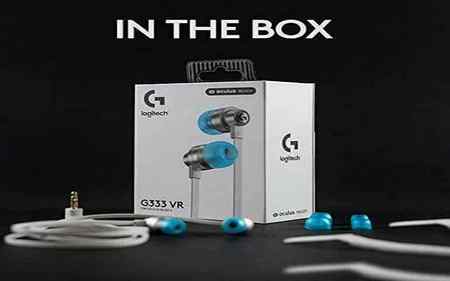 Despite the popularity of TWS accessories, classic wired headphones are also in demand. Logitech recently introduced the G333, a dual-driver model designed specifically for gaming devices. Find out how the headset sounds and works for gamers.

The Logitech G333 looks interesting - its sleek design is offset by some fun gamer-y elements. In the editorial we visited the black headphones, which received inserts in blue. Such a combination does not look too flashy, but makes the gadget's appearance memorable. In addition, versions with purple and white colours can be found on sale.

The new models are made of aluminium. The brushed metal makes them visually more expensive and protects them from external influences. If you accidentally sit down on the headset, there is a high probability that nothing will happen to it. The cable is sturdy, sufficiently thick and in the form of a so-called noodle. It's flat, so it won't get tangled, and it's comfortable to use.

On the left side there is a remote with a microphone and three buttons. Two are for volume control, one more for starting music, pausing, scrolling through tracks and calling the voice assistant. The model has a 3.5mm four-pin plug and can work as a headset on smartphones, tablets, laptops and other devices.

G333 fits snugly in your ears and won't fall out even when walking or running with your phone. Three sets of silicone ear pads, a travel pouch and a USB-C connector adaptor are included. The latter is useful for gadgets without a mini-jack. These days there are more and more gadgets without an audio jack, so it's nice that the vendor took care of the adaptor.

Dual 5.8mm and 9.2mm dynamic drivers deliver high-quality audio. One is responsible for the treble and midrange, the other for the bass. Resistance is 24 ohms, and frequencies range from 20Hz to 20kHz. The result is well-balanced reproduction that is clean, pleasing and without frequency slippage. Bass is moderately fat and rich. The Logitech G333 does not have an exorbitant maximum volume. In practice, this is not an inconvenience - to listen to music comfortably, all you have to do is to set the volume to 60-70%. At high settings there is no croaking or chuffing, tracks are played cleanly.

To put it to the test, we put it to the test in various gamer scenarios. First, we spent half an hour playing PUBG Mobile on a smartphone using the included adapter. Then we killed some robots in Horizon Zero Dawn on PlayStation 4 by connecting the headset to a wireless gamepad. We finished up by running Battlefield V and Forza Horizon 4 on our laptops, while chatting to our friends on Discord.

The games were nothing but good vibes. The G333 allows you to spend hours on end against your enemies thanks to its comfortable in-ear fit and soft ear cushions. The microphone proved to be sensitive, but resistant to distortion of whistling and hissing sounds. That's why partners can hear speech clearly and loudly.

Shooting games creates an immersive experience with highly detailed environments and atmospheric combat. Explosions, machine gun fire, machine gun fire, enemy footsteps - sounds reproduced realistically on all game platforms. In a racing simulation, you feel the approach of the cars and the friction of the rubber during manoeuvres on tight corners. And every appearance of the rampaging robot animals in Horizon Zero Dawn makes you cringe and sit up straight in your seat.

The Logitech G333 leaves a good impression due to its bright, detailed sound that is geared towards gaming sessions. Other pluses of the new product include a quality microphone with good sensitivity, a flat cable that is difficult to tangle, and the included USB-C adapter. The headset sits comfortably in your ears and won't fall out even with heavy walking. The accessory is suitable for cyber athletes and casual gamers alike.