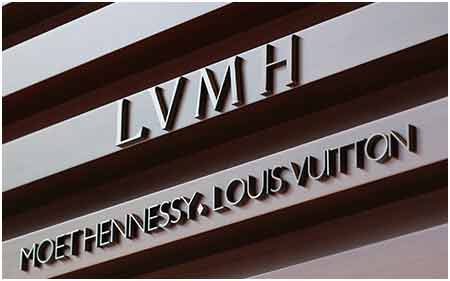 The world number one in luxury launched the spring publication season on Tuesday evening and set the bar high for the other members of the Cac 40. Its turnover as of March 31 was higher than analysts' expectations, despite the cognac and China.

As a regular on the catwalks, LVMH once again opened the new season of quarterly publications for the Cac 40 by announcing its turnover for the start of the year on Tuesday evening. The luxury group innovated for the occasion, replacing its somewhat austere conference call with a webcast with impeccable sound and a well-organized screen: on the left Chris Hollis, the director of financial communication, and Jean-Jacques Guiony , the chief financial officer, who made comments and then answered questions from analysts; on the right the progress of the presentation by slides also rejuvenated.

The turnover at March 31 was well worth this small investment because it once again proved to be higher than consensus expectations. “Great results”, commented an analyst live, “good start despite the geopolitical context and the continuation of the health crisis”, had declared shortly before Chris Hollis.

A billion more than the consensus

First quarter sales of LVMH (owner of Investir) reached 18 billion euros, up 29% in a favorable monetary context, since exchange rates brought 6% growth. Excluding currency effects, activity still increased by 23%. The FactSet consensus was counting on billings of 17 billion euros as of March 31.

The Fashion & Leather Goods division, with Louis Vuitton and Dior as main drivers, largely ensured the performance. With sales of 9.1 billion, it contributed a large half of the group's turnover and ended the quarter with growth of 30% excluding currency effects. "Louis Vuitton is never far from the average for the division," recalled Jean-Jacques Guiony, adding that the star brand of the group with 75 houses has benefited in recent months from the opening of two leather goods workshops in the region. of Vendome.

The dynamism of the Fashion & Leather Goods division therefore largely offset the growth of only 2% in Wines & Spirits (with sales of 1.6 billion), which showed contrasting situations: still very strong demand for champagnes, of which volumes sold increased by 14% in the first quarter, but a contraction of 18% for Hennessy cognacs.

This situation is the result of still limited supplies in the United States for VS qualities. “We ran out of volumes in the first quarter,” acknowledged the CFO. In addition, “maritime transport is disorganized between France and the United States. »