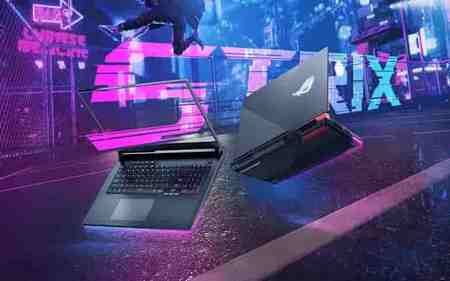 There's a term in the gaming lexicon called "imbalance". It's a way of referring to a character whose performance is extremely high. But anything can be an imbalance, even an ASUS ROG Strix G17 notebook. After all, the novelty offers a 144Hz screen, the most powerful AMD Ryzen 5800H CPU and an NVIDIA GeForce RTX 3070 graphics accelerator for a reasonable price. But is everything as good as it looks?

There aren't many gaming solutions on the market right now with a 17-inch screen - users like lighter, more compact options. But since new processors and graphics accelerators are much more efficient than before, they can be adequately implemented in a smaller size. For example, you could take a chassis like the old Python and place a large display there. That's exactly what the creators of the ASUS ROG Strix G17 did. Indentations on the sides and top are minimal, and they even eliminated the webcam.

The large display is also suitable for those who want to skip the desktop to save space. Since it's hard to build a system with new hardware these days, a notebook with AMD Ryzen 5800H and RTX 3070 would be a reasonable alternative.

The design of the ROG Strix G17 screams gamer appeal. There's an illuminated logo on the cover, a keyboard that glows with rainbow-colored lights, and extra illumination on the bottom of the chassis. However, if you're not a fan of RGB you can switch all this glory off.

The top panel is made of aluminium, while the rest of the chassis is plastic. The deck's surface has a soft-touch coating. Though the materials aren't the most expensive, the build quality is solid and the notebook feels solid and reliable. This is reinforced by the rigid hinge and sturdy hinge. One unusual feature is the subtle "ROG" print that runs along the outside and inside of the unit.

Another ingenious design feature is the angularly shaped power button. It's conveniently located on top of the keypad, so you're unlikely to accidentally press it. The absence of a fingerprint scanner, as well as facial recognition, is frustrating. And how can it be recognised if there is no webcam? On the other hand, the paranoid won't have to put a Band-Aid on anything.

As its name implies, the ROG Strix G17 has a 17.3-inch Full HD display. The pixel density is 127 ppi. Considering the display is matte, that's not even a bad thing - the crystal effect is almost invisible.

The brightness of the panel reaches 300 nits, which is enough for comfortable gaming indoors. Viewing angles and contrast levels also do not cause complaints. In addition, we are pleased with the absence of glare on the black background - it shows the high quality of the display module. Finally, the screen will suit those who can't stand high-frequency backlight flickering, because PWM for brightness control is not used here.

The screen has a refresh rate of 144Hz, and a grayscale response time of just 7.2ms. The display is well-suited for competitive gaming, where fast response times are important. For graphics-centric applications, on the other hand, an external display is a good idea. The claimed 62.5% sRGB colour gamut is good for watching films, but not for content creation. Calibration is also far from benchmark - a deviation of ΔE > 4 significantly distorts the halftones.

A pair of 4-watt speakers is located at the bottom of the cabinet and plays into the desk. The sound is typical of small speakers - low frequencies are missing, but the vocal range is well developed. If you want accurate localisation of sounds, you'll have to plug in headphones. The onboard audio card is powerful enough to drive 150-ohm studio monitors and background noise from multidriver IEMs is unnoticeable.

As befits a 17-inch notebook, the ROG Strix G17 features a full-size keyboard with a number pad. The layout is standard, so there's no need to get used to it. The keys themselves deliver deep typing, but the response is blurry. Perhaps the producer wanted to achieve the effect similar to Cherry MX Red - it is the button which is loved by gamers for its quick response.

The touchpad is excellent. The touch surface is large and covered with smooth glass, and Windows Precision's gesture and motion sensing is error-free. Clicks only work on the bottom of the touchpad, but they're quite tight and crisp.

Ports are plentiful: three USB 3.2 Gen 1 Type-A, one USB 3.2 Gen 2 Type-C (DisplayPort / power delivery / G-SYNC), HDMI 2.0 and RJ45 LAN for wired network connectivity. The only thing missing is a card reader, though for a gamer's laptop this is not critical.

An AMD Ryzen 5800H CPU with 8 cores, 16 threads and 2GHz base clock is responsible for the model's performance. CPU TDP is 45W, but under load, power consumption reaches 54W. Copper tubes and heat sinks as well as two coolers are used for heat dissipation. The CPU uses Liquid Metal Thermal Interface, a feature found on PlayStation 5 and one that ASUS has been using for two years and isn't going to give up.

Such a powerful CPU complements the NVIDIA GeForce RTX 3070 notebook graphics accelerator. The mobile version of the GPU has fewer cores than the desktop version and also runs at lower frequencies. However, it still performs better than the desktop RTX 2080 due to better processor, faster memory and all architectural improvements.

It would seem that the hardware is superb - the novelty is destined to crack demanding games like nuts. However, the test sample turned out to be an engineering sample with 8GB of RAM running in single-channel mode.

It's impossible to get representative data with such a limitation. Even on medium settings, Cyberpunk 2077 produced less than 50 fps, with the CPU and graphics card less than half-loaded. Activating DLSS didn't help much. This is, by the way, about how pointless it is to take a laptop with 8GB of RAM to play games today.

To unlock the system's potential and completely eliminate the bottle neck, testing was done with 32GB RAM (2x16GB). The difference in performance is already noticeable in synthetic tests.

In games, CPU and GPU temperatures don't exceed 75°C, cooler noise doesn't bother you too much. In 3D Mark Time Spy tests, the CPU heats up to 100°C and fan noise gets really loud, but this is an extreme scenario: in real life usage of working software and maximum hardware load, temperatures stay in the 80-90°C range.

The basic version is equipped with a 1TB SSD. When at 80% capacity, CrystalDiskMark shows a read speed of 3584MB/s and a write speed of 2575MB/s. A higher capacity SSD is also available if you want. However, unlike the desktop version, the Ryzen 5800H doesn't support PCI-E 4.0 and associated drives. So it is not possible to get a significant speed increase.

The ROG Strix G17 gets a 90Wh battery. Thanks to the fact that the new generation hardware is much more efficient than the previous ones, the battery life is impressive by gaming notebook standards. In power saving mode, it lasted 9.5 hours playing Full HD videos from YouTube at 50% brightness. When playing Fortnite, the battery life was 55 minutes.

The included 240 watt adapter replenishes 50% of the charge in just half an hour. It's also possible to charge the laptop via USB-C, but in that case the charging power is limited to a hundred watts.

The ASUS ROG Strix G17 offers beastly power that was previously impossible to pack into a notebook case. In addition, the novelty pleases with a wide range of ports, an excellent touchpad, decent runtime and a large 144Hz screen, honed exclusively for gaming. Otherwise, it's a great option if you're looking for a laptop to replace a desktop PC.