Back to news Despite falling against the dollar, the euro is still too strong 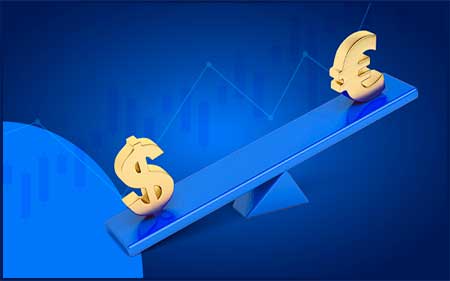 According to our columnist Mark Tuati, president of ACDEFI, it should depreciate even more. It's good that France and the eurozone need a less strong euro, he said. “However, be careful not to go too far, because too low the euro and even more so the dollar can also undermine the credibility of the EMU and cause a movement of distrust towards it,” the economist nevertheless warns.

Even though the euro (EUR/USD) peaked at $1.23 on January 6, 2021 and (too) many forecasters still saw it rise for a long time, the euro (EUR/USD) USD) fell logically. First at $1.17 in March, then climbed to $1.22 in May-June, and finally dropped by about $1.13 since mid-November. This is certainly good news, especially for the economic activities of the Economic and Monetary Union (EMU), which needs it so much. Indeed, the normal euro/dollar level is around $1.10 per euro. This is based on both purchasing power parity (PPP) and the natural exchange rate, according to Natrex. The latter characterizes the equilibrium level of the euro / dollar according to the main economic indicators, such as growth, inflation, savings and trade balance.

However, let's not forget that the equilibrium level of the euro is different depending on the country: $1.35 for Germany, but $1.05 for France, $0.90 for France, Italy and $0.70 for Greece. In other words, with the exception of the former Deutschemark area (Germany, Austria and the Benelux countries), the euro is still too strong to ensure a resumption of sustained growth in the vast majority of EMU countries. Let's remember that the strong growth of 2021 is just a correction of the historical recession of 2020, and that from 2022 it will return to its structural level, that is, by about 1% both in France and in the entire euro area.

Much more problematic is that all leading indicators of GDP change in the Eurozone indicate that it should slow down even more in the coming quarters. Moreover, this softness extends to all members of the EMU, in particular to Spain, Italy, France, as well as Germany, which no longer manages to play its role as an unshakable locomotive of the region.

What's most striking about the EMU's continued slowdown is that it's happening quite independently of the US economy. Indeed, while the eurozone's leading indicators have declined markedly in recent months, those in the United States are reporting robust growth until at least spring 2022. sides of the Atlantic clearly justify the fall of the euro/dollar.

In addition, the US Federal Reserve has already warned that it will stop "printing money" by mid-2022 and will definitely raise the key rate two or three times next year. Conversely, the ECB remains deaf to inflationary threats and appears to want to maintain its loose policy until at least April 2022. A strategic difference that clearly favors the dollar against the euro.

The consequence of these discrepancies in terms of growth and monetary policy is the increase in differences (known as spreads) in government bond interest rates. Thus, the ten-year interest rate on US bonds has been flirting with 1.6% since last summer, while on the German Bund it has stabilized at -0.25%. Thus, with levels of 185 basis points, spreads of long-term rates are approaching their historical peaks. In other words, the economic and financial fundamentals are driving the euro/dollar down further.

In this context, a depreciation of the latter to $1.10 over the next few months seems highly likely. It will also allow the eurozone to avoid a recession. Indeed, this will support exports, but will also increase the competitiveness of domestic products compared to imported ones, which will lead to an increase in the market share of the former. Finally, it should also encourage foreign investment in the EMU, while reducing capital flight outside the latter. The only downside is that the depreciation of the euro will continue to fuel imported inflationary pressures. In total, with a depreciation of the euro by 10%, the growth in activity gains 0.5 points. This, of course, is not much, but in the context of current and especially future economic weakness, this is always a good thing.

In conclusion: yes, France and the eurozone need a weaker euro. Let's never forget: the last time strong growth in France and in the EMU was in 1999-2000, when the euro was worth about $0.90. Conversely, every time the euro exchange rate exceeded $1.20, the growth stopped.

However, be careful not to go too far, because too low the euro and even less the dollar can also undermine the credibility of the EMU and cause mistrust towards it. Consequently, the interest rates on the bonds of some states, of course, Greek, Italian, but also French, could rise dangerously, rekindling a public debt crisis, which, like a temporarily dormant volcano, could wake up and become even more destructive than in the past.

This is enough to emphasize that while a depreciation of the euro/dollar will inevitably bring some positive effects on the growth of the Eurozone, these can be quickly erased in the event of a major political crisis within the EMU. It's sad to write, but the line between heaven and hell is sometimes very thin, especially in Europe.

His new book RESET - What New World Tomorrow? has topped the list of best-selling budget essays since its release on September 2, 2020

You can also find his video chronicles on YouTube channel. The latest one: Rise of the stock markets: how far and how long?